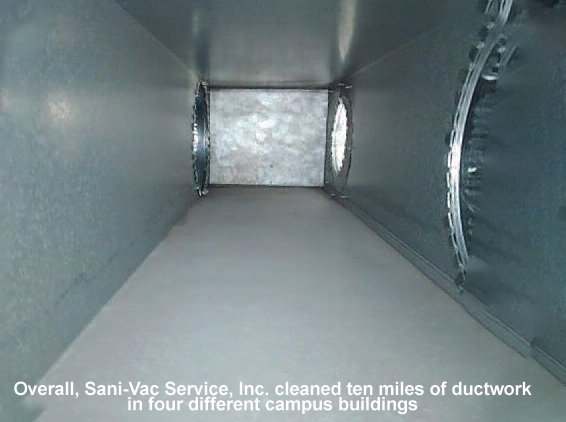 Tackling one of the largest jobs in your company’s history is the best way to celebrate 45 years in business. In 2019, ten miles of ductwork were impeccably cleaned in four different buildings dotting the campus of the Ford Research and Engineering Center in Dearborn. Sani-Vac Service, Inc., a specialist in ductwork and exhaust system cleaning, “cleared the airways” of several large-scale staff buildings on Ford’s Research and Engineering Center. Ford routinely has these tasks performed to help ensure the health and safety of its buildings.

In teams of four to six workers, Sani-Vac’s crew fanned out across the campus’s south end dressed in Tyvek suits and respirators to clean bathroom exhausts and vacuum dirt and debris in the ductwork of these four buildings. 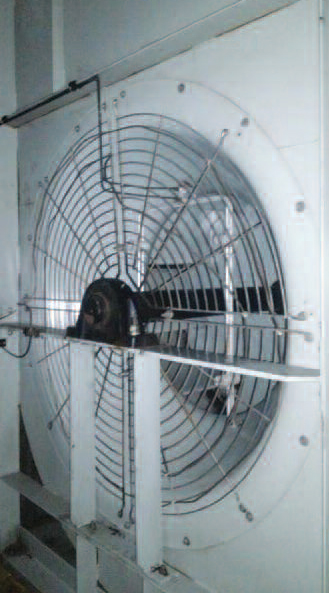 Air handling units are the heart and lungs of a building, and stepping into these massive units, Team Sani-Vac meticulously cleaned the coils, condensate pans, blowers, blower wheels and filter racks, along with the louvers, dampers and all of the other internal components making up an air handling unit. Sani-Vac cleaned the entire cavity of each air handling unit from the ceiling to the floor as well.

700,000 Square Feet and 10 Miles of Ductwork Overall, Sani-Vac cleaned the inner workings of four buildings of different vintages, including three 65-year-old buildings originally constructed in the mid-fifties and a fourth structure built in 1995.

Each of the three mid-20th Century buildings is 150,000 square feet, and the fourth is even larger at 250,000 square feet. Tally the square footage of all four buildings and it comes to an incredible 700,000 square feet of space laced with miles of ductwork, not to mention bathroom exhaust systems, hundreds of variable air volume (VAV) boxes and18 air handling units.

The larger staff building has a ground-floor mezzanine and floors two, three and four subdivided into four different zones. At four floors each and the same square footage, staff buildings “are identical carbon copies of each other,” said Sani-Vac President John H. Line III, ASCS, CECS. Being identical streamlined the delivery of this massive project.

Over the years, Sani-Vac has performed a great deal of work in the design studios, office space and mechanical shops of the Product Development Center, one of the larger buildings in the Ford Research and Engineering Center, and in Ford’s original engineering laboratory, located across Oakwood Boulevard from the modern-day campus.

“We've had a good relationship with Ford Motor Company over the last 30-plus years,” Line said. “They trust us to do a good job. And they like what we do.”

The Fiberglass Challenge This long-earned trust was not misplaced on this massive undertaking. As a long-lived company, Sani-Vac clearly has all of its “ducts in a row” and could handily deliver a project of this magnitude and complexity.

Accessing the ductwork proved challenging because of the high ceilings in many areas. Additionally, “portions of the ductwork had fiberglass duct liner that demands special cleaning tools and special cleaning techniques to prevent damage to the liner,” Line said. When cleaning fiberglass-lined ductwork, you have to use softer bristles and softer brushes. You have to be a bit more delicate with your cleaning technique versus cleaning a flat piece of sheet metal ductwork, which allows for a more aggressive approach.”

This added level of care places demands on the schedule but is necessary to protect building occupant health. “If a building’s ductwork is all lined, it would probably add up to 25 percent to the time needed for cleaning,” Line said. “But we do not want to disrupt the liner, because if damaged, it will disperse fibers into the building.”

Fiberglass liner is a common product used for thermal insulation and sound-deadening or acoustic control. “Many times it is less expensive to line a duct on the shop bench rather than wrap the duct while it is hanging,” Line said. “We actually encounter it a great deal. Some buildings have all the ductwork lined in fiberglass, while others wrap it.”

Whether fiberglass duct liner is present or not, Sani-Vac puts a lot of elbow grease into its work. “It’s all source removal,” Line said. “We do not just blow air across the duct in any area. We touch all surfaces of the ductwork either with vacuum brushes or mechanical whipping systems to remove the actual source of the contaminant from the ductwork.”

Sani-Vac did encounter another fiberglass challenge while cleaning the hundreds of VAV boxes within the Ford buildings. “The VAV boxes can be challenging because the boxes are sometimes difficult to access,” Line said. “And when you do access the boxes, they are lined with fiberglass also, so once again we had to be careful to avoiding damaging the lining while cleaning.”

Bathroom exhaust ducts are always unfiltered. Without a filter, a substance resembling built-up dryer lint accumulates in the exhaust system’s ductwork and begins to obstruct the duct like a blocked artery. “If you have a duct that is originally10 x 10 inches, it will become a six-inch round duct after many years of accumulation of this lint-like substance,” Line said. “You no longer have the same cubic feet of air flowing out of the bathroom ductwork.

“The fan is usually coated with this lint also, so fan production is reduced as well,” Line said. “Taking the two together, the size of the duct is cut in half. With this level of restriction, it is very difficult to ventilate due to constriction of the duct space and the original fan rating.” 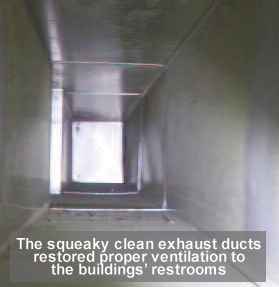 The end result of all of this lint-induced havoc is poor ventilation and unpleasant odors. After cleaning all of the bathroom exhaust ducts at the four buildings, Sani-Vac earned rave reviews for the vastly improved ventilation in all of the building restrooms. “They noticed a tremendous improvement and change for the better,” Line said.

Actually all return and exhaust air in a building is unfiltered, according to Line. “Filtration within the air handling units does provide filtered air for the supply ductwork,” he added.

Cleaning the “Veins” of a Building The Sani-Vac crew followed “rivers” of sheet metal snaking through the four buildings hidden and unseen for thousands of linear feet. The Sani-Vac crew typically cleans in the direction of the air flow, beginning with the return air ductwork, back to the air handling unit, and then on to the supply air ductwork, Line said. 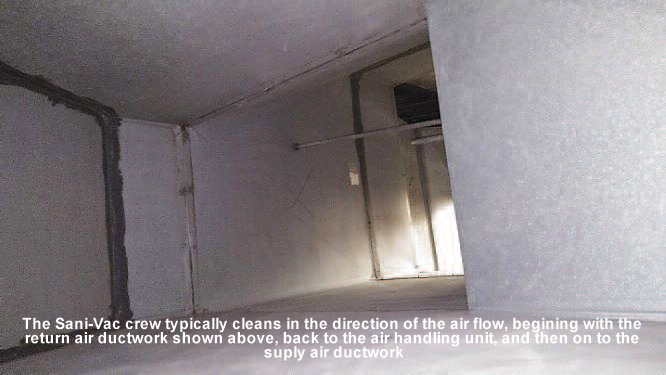 The ductwork makeover includes opening up and cleaning the interior of the VAV boxes as well. Like taking your car to a detailer for cleaning, every facet of the HVAC system is systematically, meticulously and thoroughly cleaned. “We clean all flex duct that connects from the main duct into the supply diffuser,” Line added. “The return air grilles in the ceiling are cleaned, along with the return air ductwork, although for the most part, the ceilings are used as the return air plenum at the Ford buildings.”

Meticulously Cleaning Four Buildings Sani-Vac treated each building like a separate project with a dedicated crew of four to six workers for each building. Work on the staff buildings began in successive waves, beginning in September, October, and December 2019.

Sani-Vac bested its schedule for the three identical buildings and delivered the larger building right on target. “Based upon the square footage, the amount of units and the amount of ductwork we saw in each drawing, we gave each building an estimated time to finish,” Line said. “We forecasted 60 working days for the three identical staff buildings, and we finished the buildings in 50 days. We allotted 85 working days for the larger staff building, and we delivered right on target.”

Sani-Vac gained speed with each successive building in the group of three identical structures. “We learned from the first building,” Line said. “We had enough working knowledge of the first building, so that when we started the next building, we could relay to the crew exactly what they needed to do and what the obstacles were in the building.”

The ductwork, bathroom exhaust systems and interior components of the air handling units are vastly improved from their original state. But the proof of a job well done in ductwork and exhaust sanitation is what the people in the building experience on a daily basis, namely a cleaner and healthier environment. “Ford and the staff were very happy with the end result,” Line said.